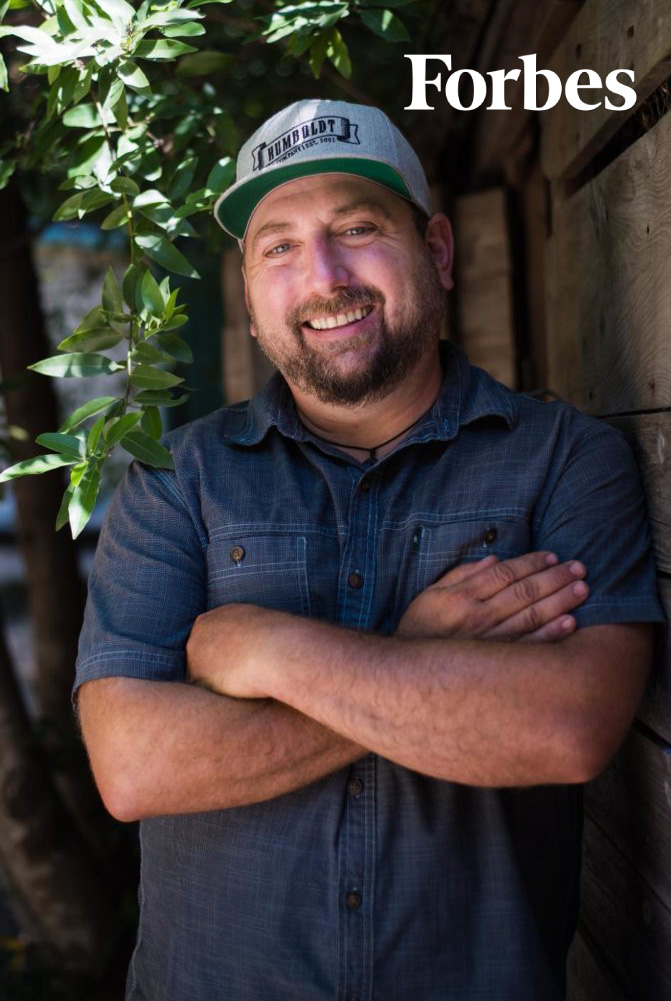 Warren Bobrow=WB: Where are you from originally? How did you decide on Humboldt? I grew up on a Biodynamic farm, what are your thoughts about this methodology in outdoor grown cannabis?

Nathaniel Pennington=NP: I’m originally from Upstate New York and Philadelphia, but I hightailed it out to Humboldt County when I turned 18 after a brief hiatus at an art school studying ceramics and glass blowing. I’d honestly say that fate brought me to Humboldt, I fell back into a relationship with a high school sweetheart when she convinced me to drop out of college after only two months to travel across the country. After a month or so of taking our time traveling across the country car camping, we landed at the very liberal hippy school, Prescott University in Arizona where she promptly left me for a relatively famous female folk singer. I then wandered the West like a vagabond heartbroken puppy until a month later, I found myself nursing my emotional wounds with the world’s best cannabis in my new home, Humboldt County.

That was nearly 25 years ago now and while cannabis has been a crucial part of my adult life I really stayed in Humboldt because of the natural beauty and community. I spent a couple years living in an intentional community up in the mountains where we grew vegetables biodynamically. The biodynamic methodology of farming made a lot of sense to me, and I still apply many biodynamic principles in our breeding areas and trial fields.

WB: Why cannabis? What was your intro to the plant? Do you have a mentor? Who?

NP: The very first time I smoked cannabis I immediately knew that society had misrepresented the plant. While I wasn’t too miffed by being told that cannabis was a terrible drug when it actually wasn’t, that misrepresentation did cause me to be curious about the depictions of other illicit substances, which was not a good thing because some really are quite dangerous. As I moved past hiding the fact that I enjoyed cannabis I did actually have a cannabis mentor, or really just a person that I respected a lot who happened to grow cannabis and smoked more than anyone else I’ve ever met. His name is Peter Brucker, and as well as being an amazing guitarist (where I learned that too) and a grower of fine cannabis, he helped found several community based non-profit environmental groups which were helping to restore rivers and in particular save the wild salmon runs which had been, at one time very prevalent here in Humboldt County. I was impressed with how productive he was stoned and how cannabis seemed to help him analyze the world and figure out a good set of priorities on a very shared planet.

He gave me my first cannabis seeds and helped me write grants that funded millions of dollars worth of environmental work. I’d say the genomics and science part of our breeding came from our teams’ biology background but most of the roots came from Petey Brucker. 3. Tell me about your company. What is your six month plan? One year? What obstacles do you face? How do you foresee removing these obstacles? Humboldt Seed Company is a cannabis genetics resource. We primarily breed and improve cannabis genetics for today’s quickly evolving marketplace. Our products come in the form of seed or rooted cuttings otherwise known as clones, although we do not mass produce clones.

This is no easy task as it entails having a firm understanding of what makes cannabis strains sell at retail, and then also what makes them attractive to cultivators. Because cannabis is quickly evolving both in terms of the plant species and the industry surrounding it we feel like we have clear advantages through our 20 plus years of industry and community experience combined with our science-based breeding strategy. Over the next few years Humboldt Seed Company expects so set up shop in several more states and expand our international reach as well. We currently have seed production and distribution in California, Oregon, Oklahoma, Maine, South Africa, Spain and a minor operation in Arizona. We’ve begun projects in Michigan, Washington State and Massachusetts. A big obstacle that we’re currently facing is the inability to do normal business banking, we feel that this ridiculous situation will likely be rectified through legislation and public pressure which is why we’re supporting industry associations that are fighting for change.

Along similar lines as the banking issue are the shifting regulatory goalposts facing the industry in general. As a genetics company we often produce multiple genetic profiles in seed form for an upcoming season knowing that changes in regulations, such as the recent change in hemp testing requirements, can make one seed type useless and another, essential. We’re looking forward to the regulatory landscape settling down both domestically and internationally, and of course we’re really looking forward to a time when we can operate like a normal business and do interstate and international commerce/e-commerce on more than just hemp seed.

WB: Do you cook? What is your favorite restaurant? Where? What kind of food?

NP: Thai, Cambodian, and Malaysian are longtime favorites. I developed an affinity for these cuisines through traveling. I’ve always enjoyed street food especially, because you get to learn more about the people and connect with the culture in a more personal way. I’m not really a white table cloth kind of guy. I was exposed to a lot of interesting food and people during my environmental work in Borneo. Here locally, I am a big fan of salmon cooked the local native people’s way. It’s super fresh, cooked over a long, narrow fire pit and skewered on Redwood sticks.

WB: What is your passion?

NP: Humboldt Seed Company has always been a company that wants to help people. We want to make our homeland better for families, more equitable, more just, and we want to foster a sustainable environment. Our founding team, including myself and Benjamin Lind, were environmental scientists with a focus on freshwater ecosystems. My life passions have included river restoration, with an emphasis on endangered salmon genomics research revolving around protecting salmon, environmental and social justice activism with Humboldt’s Indigenous Peoples, and of course breeding cannabis.

Over my career as a fisheries biologist in Humboldt I co-founded several successful nonprofit groups, many of which I still sit on the Board of Directors for, wrote millions of dollars in grants, including a grant for 100k that initiated genomic research on salmon eventually published by Science Magazine and the Proceedings of the National Academy of Sciences and adding endangered species protections for Humboldt Salmon. I worked hard to see the worlds largest river restoration project and local Klamath River dam removal deal signed in 2006.

I led trips to the Amazon Basin and Borneo with local Native American youth to protect indigenous peoples rights and stop overdevelopment and exploitation of their land and peoples. As the cannabis plant is de-stigmatized we’d love to see a vibrant craft market develop that allows people access to this amazing plant and its vast medicinal potential!

We Do Not Sell Cannabis Products On Our Site. Please Visit Our Retailer’s Page To Find A Retailer Near You, Or Inquire About Wholesale Partnerships.

©2021HUMBOLDT SEED COMPANY | GOVERNMENT WARNING: THIS PRODUCT CONTAINS CANNABIS, A SCHEDULE I CONTROLLED SUBSTANCE. KEEP OUT OF REACH OF CHILDREN AND ANIMALS. CANNABIS MAY ONLY BE POSSESSED OR CONSUMED BY PERSONS 21 YEARS OF AGE OR OLDER UNLESS THE PERSON IS A QUALIFIED PATIENT. CANNABIS USE WHILE PREGNANT OR BREASTFEEDING MAY BE HARMFUL. CONSUMPTION OF CANNABIS IMPAIRS YOUR ABILITY TO DRIVE AND OPERATE MACHINERY. PLEASE USE EXTREME CAUTION. WARNING: CONSUMING THIS PRODUCT CAN EXPOSE YOU TO CHEMICALS INCLUDING MARIJUANA SMOKE, WHICH IS KNOWN TO THE STATE OF CALIFORNIA TO CAUSE CANCER. FOR MORE INFORMATION P65WARNINGS.GOV. BY PURCHASING OUR SEEDS YOU HOLD HARMLESS HUMBOLDT SEED COMPANY AND AFFILIATES. MATERIALS AND INFORMATION ON OUR SITE DO NOT GUARANTEE RESULTS. LICENSE NO. CCL18-0000267.